The Asia-Pacific (APAC) region is making good progress with 5G deployment, with government backing being a significant factor in how quickly a country can become 5G-ready as of 2021.

According to Economist Intelligence Unit (EIU) research across 16 APAC nations, nine markets have either completed 5G spectrum auctions or launched commercial 5G services, with some even crossing the 50% mark in terms of 5G coverage as of March this year.

Laveena Iyer, Research Analyst, EIU, said iTNews Asia in an interview: “Prior to a launch, having a comprehensive nationwide 5G roadmap is very helpful for operators. After a commercial launch government support in the form of tax incentives, low-cost loans, direct investment helps operators as they work on network expansion.”

She added that the assistance has also spurred businesses to improve network speeds, coverage, and the number of use cases for the commercial sector.

South Korea, Taiwan, Japan, and China are the most advanced in 5G; Thailand is making good progress; and India, Indonesia, Vietnam, the Philippines, Malaysia, Sri Lanka, and Pakistan fall behind their regional rivals in terms of 5G policy implementation, having yet to develop one.

In some of these countries, operators are still focused on enhancing 4G connectivity, thus any progress on 5G is unlikely before 2022.

“A country’s ability to progress to 5G will largely depend on existing network infrastructure. Mature markets such as South Korea and Australia already had an over 90% 4G coverage. But Malaysia and the Philippines still clock under 80% in terms of 4G network coverage so operators in these countries will not be able to launch a 5G network until early 2022,” explained Iyer.

Looking ahead to 2021, she anticipates that different markets in the APAC area will pursue quite different goals, and that 5G adoption would be uneven.

“On one hand countries such as Japan and Taiwan are moving towards expanding 5G network coverage beyond major cities and improving network speed. On the other hand, in India and Indonesia, operators still await a nationwide 5G policy, certainty over contiguous blocks of 5G spectrum, final decision on the base price, etc. The disparity over progress in 5G will continue to be seen in Asia during this year.”

Rapid progress allowed by the release of spectrum

According to EIU, most Asian regulators have been quick to release spectrum in the low 700 megahertz (MHz) band (ideal for covering broad geographic areas at the sacrifice of speed) enabling companies to test 5G from 2019. This has allowed regulators time to free up spectrum in higher bands, which can support faster speeds over shorter distances.

Spectrum in the mid 3.3(GHz)-3.5 GHz band and the high 26-28 GHz band has been made accessible in several regions, with most regulators allowing smaller operators to obtain frequencies by establishing low base costs.

Australian and Hong Kong regulators have been very helpful in establishing low base prices. High spectrum costs have been a source of concern for businesses in India, as regulators and operators continue to disagree over the base pricing. EIU anticipates that operators in the country will look into money-raising measures to assist fund future spectrum auctions. 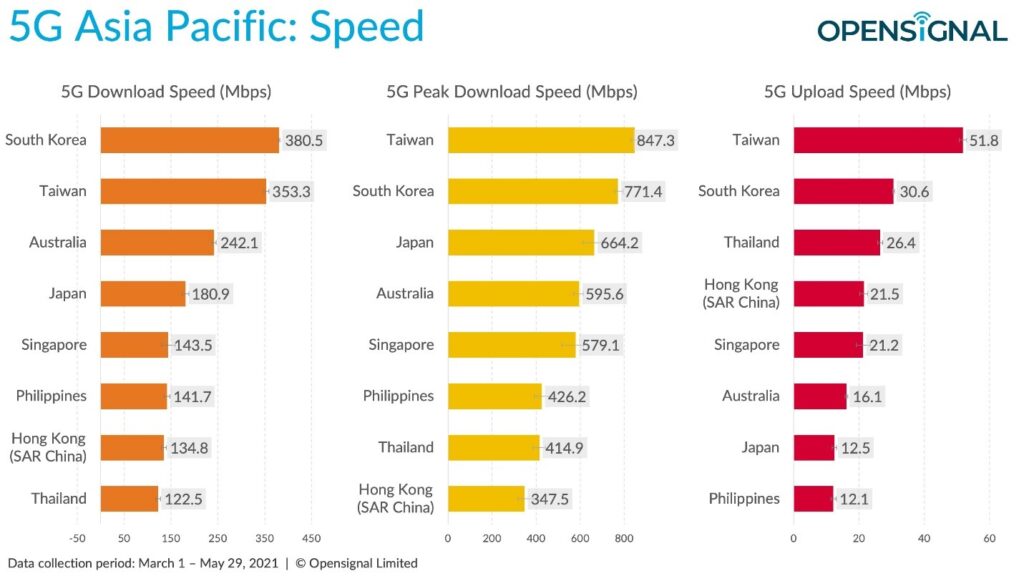 Many smartphone users are embracing 5G to improve their mobile app experience. When we compare 5G-powered video, multiplayer gaming, and the experience of conversing through popular voice apps, we see results that are substantially different from the 5G speed comparisons above.

Singapore, for example, is ranked second in the world for 5G Games Experience, trailing only gaming-obsessed South Korea. Thailand now ranks four places higher for 5G Video Experience than it does for 5G Download Speed, and Hong Kong ranks third. In contrast, Japan’s inexperienced 5G experience means it falls down the table. 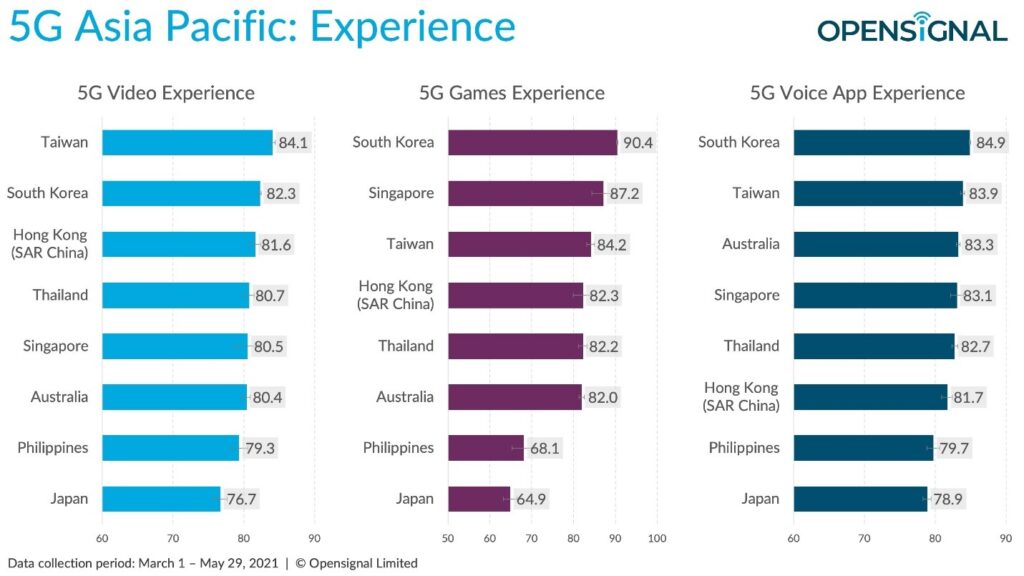 While compared to earlier 4G network technology, all APAC markets report much higher average download speeds when using 5G. The difference varies from 10.4 times faster in the Philippines and Taiwan to 2.9 times faster in Singapore.

And keep in mind that this is comparing early versions of 5G technology to the most recent iteration of 4G technology, which follows nearly a decade of steady advancements in 4G technology since the debut of the first 4G networks in 2009/10. Over the next decade, 5G will improve, and the 5G mobile experience will increase the gap with the previous mobile generation, particularly as carriers expand mmWave 5G deployment in the region.

Augmented/Virtual Reality is expected to see growth In Asia-Pacific Regions this 2022.